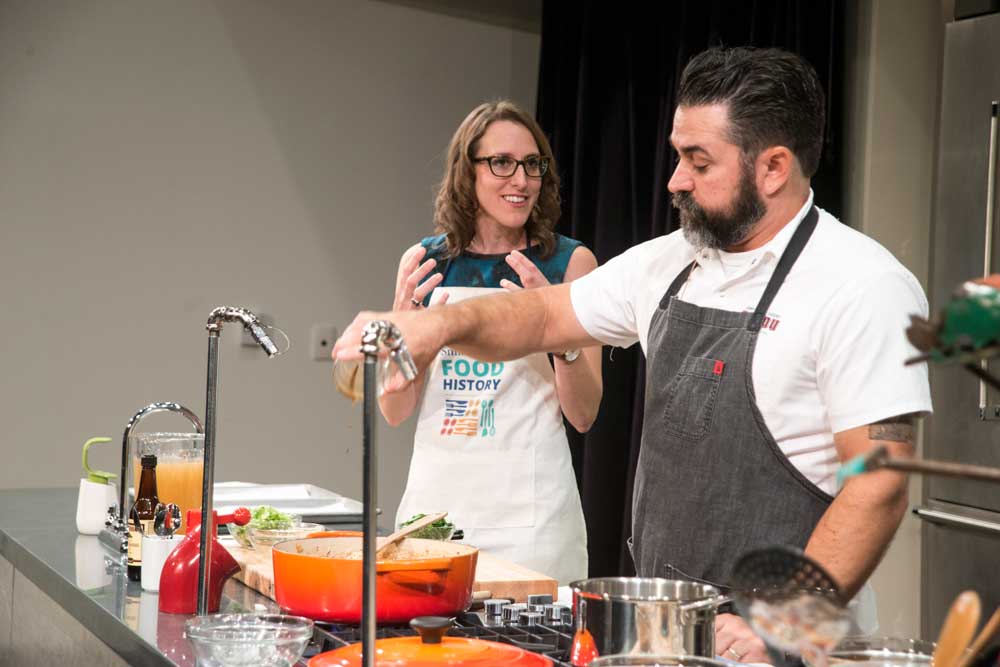 Ashley Rose Young hosts a food-history program with Chef David Guas on July 21 at the National Museum of American History. (Photo by Richard Strauss and courtesy of the museum)

This summer, I took on a dream position: Graduate Intern Fellow for the Food History Project at the Smithsonian National Museum of American History. This internship, supported by Versatile Humanists at Duke and the National Endowment for the Humanities, enabled me to grow my professional experience outside of my immediate discipline of history. I honed skills that ranged from exhibit curation to public programming. Through this position, though, I also acquired new knowledge about American culinary history that has influenced my dissertation project on the local food economy and culture of New Orleans. With my dissertation defense in sight, I am grateful to have had such an enriching experience at the Smithsonian.

Part of my internship focused on exhibition curation. I joined the Smithsonian team at the beginning of a refresh of a popular exhibition that has been on view since 2012: FOOD: Transforming the American Table, 1950-2015. I was able to jump into this project just as the design phase was kicking off and was therefore able to contribute to initial discussion about updating the exhibition. For example, I helped to develop a collecting initiative around the material culture of migration and food traditions in the United States and also the evolution of diet and nutrition in the second half of the 19th century.

There were often unexpected but delightful moments on the job. Just a few weeks ago, I was in the office when artifacts arrived from Alice Water’s Edible School Yard Project. My supervisor invited me into the objects processing facility to unpack a series of hand-painted garden signs created by children who participated in the Project in 2001. These objects are important in that they represent a transformative moment in food education—a movement ignited by Alice’s vision of an alternative education system driven by the “good food” movement. Although school gardens started in Berkeley, they have swept across the country and have become an important aspect of primary and secondary education in the U.S. The children’s signs reflect how they were encouraged to be involved in growing, nurturing, harvesting, and cooking food—a complete garden-to-table experience that taught them about critical topics like food systems and nutrition, but also provided them a chance to connect with a new medium: soil.

A similarly powerful and memorable Smithsonian moment occurred just one week later. I had the opportunity to help care for Julia Child’s kitchen in Cambridge, Massachusetts, which is on display in the FOOD: Transforming the American Table exhibition.

Together, my colleagues and I performed routine maintenance to ensure the safety of the objects on display, but the experience was anything but routine for me. Stepping inside her kitchen was like stepping inside a time machine. The details of particular objects came into sharp relief. I could see the knife marks on one of Julia’s cutting boards and as a result, could so easily imagine her standing above it as she chopped onions with great fervor. No tears in this kitchen! I also caught a glimpse of Julia’s make-up mirror, which hung on the inside of one of her cabinets. A tall woman myself at 5’10”, I could barely glimpse into the mirror on my tiptoes. In that moment, I really came to understand what a presence she was at 6’3” and likely 6’5” in heels.

Through my internship, I also acquired crucial experience in public programming and audience engagement. I hosted a cooking demonstration program, “Cooking Up History.” Each month, the Food History Team invites a guest chef or home cook to visit the museum and prepare—live on stage—several dishes that speak to a theme in American history. This summer, we focused on the theme of migration and explored how food has been both a bridge and a barrier to cultural connection for people living in the United States.

Our first program, held on July 21, featured chef David Guas, a New Orleans native and Washington D.C. restaurateur. Throughout the program, we discussed the differences and similarities between Cajun and Creole food through two recipes: jambalaya and pralines. As the host of the program, I helped to contextualize chef Guas’ culinary expertise and personal experiences cooking Cajun and Creole food within a broader historical context. This was a great opportunity for me to showcase my dissertation research on the culinary history of Louisiana. I was even able to sing some of the historic street food vendor cries that were so popular in 19th-century New Orleans but have now been largely forgotten. I did so in order to contextual the business acumen and significant cultural and economic presence of enslaved street food vendors. 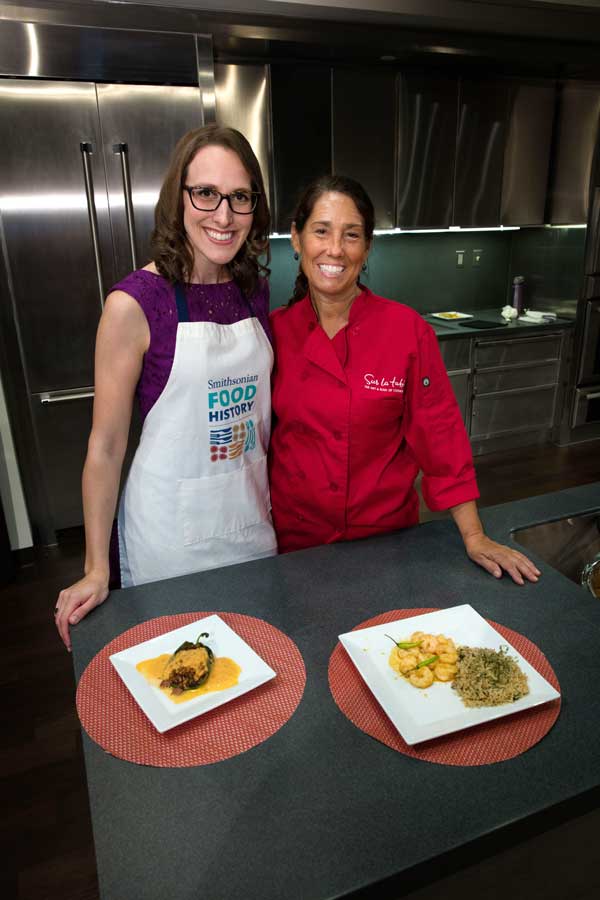 Ashley Rose Young (left) and Chef Lynne Just, who explored Julia Child’s legacy in a public program on August 11. (Photo by Richard Strauss and courtesy of the Smithsonian National Museum of American History)

Our second program, held on August 11, featured Sur La Table chef Lynne Just. Together, we investigated Julia Child’s culinary legacy and the role she played in fostering the careers of up-and-coming chefs through her television programs in the 1990s. Specifically, we focused on In Julia’s Kitchen with Master Chefs, which helped to introduce American audiences to the culinary expertise of chefs like Madhur Jaffrey and Zarela Martinez. Interested in framing our discussion around the theme of food and migration, we chose to feature the recipes and stories of these chefs because they brought new culinary traditions to Julia’s kitchen and audience. As Julia herself said to Madhur, “You’ve given us a window onto a cuisine that very few people here know!”

This was a particularly thrilling event as CNN and NTD sent crews to film the program, helping us share the history of Julia’s legacy and also speak about the importance of chefs like Jaffrey and Martinez, whose recipes Chef Just prepared live on stage. Jaffrey’s shrimp in a spicy coconut sauce and Martinez’ poblano rellenos were a huge hit among the 200-plus museum visitors who stopped to watch our demonstration. The smell of toasted spices and roasted chiles captivated the audiences’ senses. The culinary know-how of Chef Just, paired with historical background, piqued their curiosity. This kind of audience engagement was incredibly rewarding. I felt as though our visitors left with a new sense of food in America and a stronger understanding of how migration informs the American experience.

Through this once-in-a-lifetime opportunity to intern for the Smithsonian Food History Project, I was able to meaningfully contribute to an institution whose values I believe in and whose mission I hope to perpetuate in my professional pursuits: to inspire a broader understanding of our nation and its many people.

Opportunities to do so have already come up. This August, I participated as an expert panelist during one of the museum’s Food in the Garden events, where I discussed the influence of migration on popular flavors in American culinary culture. This was a rare opportunity in which I was able to draw parallels between the developments of French haute cuisine during Louis XIV’s reign in France with the fusion food cultures of colonial New Orleans. I am eager to continue to participate in public-oriented events like the Food in the Garden series where the barriers between the academy and the public break down and, together, we build a more inclusive, participatory history.