This is the second in a series of reflections by Summer 2018 VH@Duke interns. 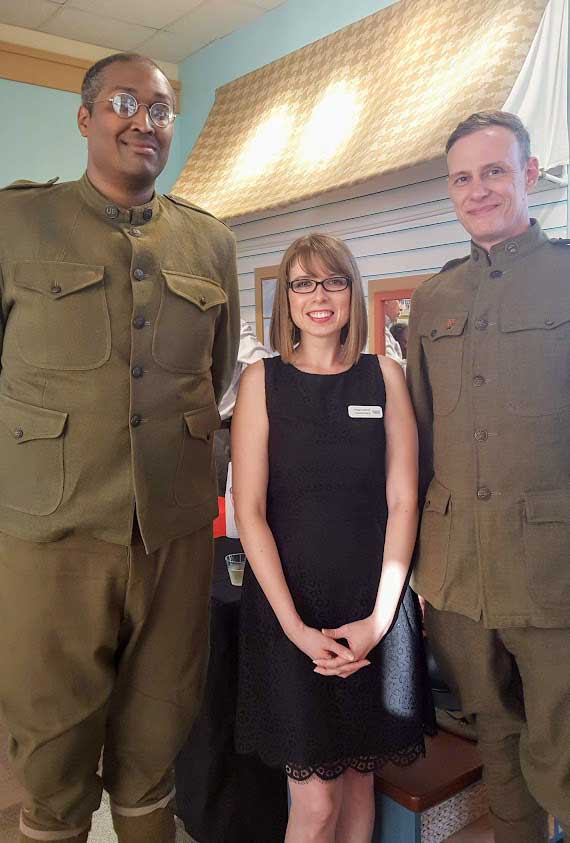 Meggan Farish Cashwell is flanked by reenactor Josh Trower (left) and Ernest Dollar, director of the City of Raleigh Museum, at the August 17 premiere of her exhibit on the history of Durham during the war. The two men are wearing actual World War I uniforms.

I had the privilege of co-curating an exhibit at the Museum of Durham History (MODH) this summer. Entitled “Durham During the Great War,” the exhibit highlights cultural, political, racial, and social changes at home as well as the experiences of soldiers abroad in World War I. The exhibit coincides with the upcoming centennial anniversary of the Armistice on November 11 and complements other tributes to the war effort happening in the Triangle, including the Rubenstein Library’s World War I exhibit.

I applied for this internship to gain experience in exhibit curation that is specifically catered to the mass public. Jeanette Shaffer (operation director of MODH) and I spent the  summer researching stories—stories of men who heeded the call and fought bravely for their country; stories of women, black and white, who labored tirelessly in tobacco factories and textile mills, joined conservation efforts, and trained as nurses and stenographers; stories of success in the tobacco industry as Durham cigarettes gained heightened popularity with soldiers abroad; and stories of segregation and violence as African American men who fought for freedom on the war front returned to a Durham still steeped in racial animosity. These stories are featured prominently in the exhibit and told through photographs, newspaper clippings, posters, and oral histories.

One of the highlights of my summer was conducting several oral histories. I called over a dozen veteran agencies with the hopes of coming across at least one or two individuals who could share their family’s World War I stories with us. I had almost given up when, out of nowhere, I received a call from Jim Pulley at the American Legion. Jim is a regular volunteer there. He told me all about his father, Wallace Pulley, who served in one of Durham’s volunteer units. Jim later introduced me to two lifelong friends of his, each of whom had unique and fascinating war stories that had been passed down to them by family members. The three of us sat down in the museum’s story room to discuss and record their histories, which are featured on the museum’s touchscreen where patrons can pick up a phone and listen to portions of them.

Balancing those stories, which focused on soldiers, with the stories of Durhamites at home entailed finding some other oral histories that had been recorded decades ago. The Southern Oral History Program allowed us to use several interviews featuring African American women who worked in tobacco factories, which was one of the main cultural shifts engendered by the war as men left and vacated jobs. Their interviews are also available for patrons.

These stories have inspired me as I revise my dissertation. While the topic of my dissertation is on legal culture in the early 19th century, curating the exhibit taught me that good storytelling is a skill that all scholars should possess. My sources primarily consist of legal records, many of which are brief. My task is to draw the narrative out of these difficult sources and weave my analysis around the stories of complainants, even if the legal officials summarizing the crimes people sought justice for left out a lot of the details. Working on “Durham During the Great War” challenged me to tell the stories of these individuals in a more compelling way.

The MODH internship effectively combined my skills as a historian and researcher as well as my passion for disseminating history to a broader audience. I now feel better equipped to apply for positions outside academia that draw on my broad skillset. I am very grateful to the Versatile Humanists program for giving me this wonderful opportunity. Recording and sharing Durham’s history with the public is an experience for which I will always be grateful.