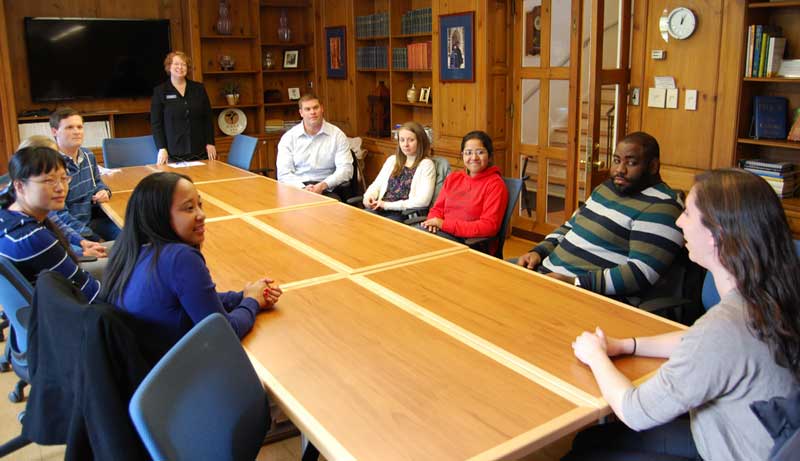 Looking for an opportunity to network with people outside academia? Don’t miss our alumni lunches during Graduate Student Appreciation Week (April 3-7 this year).

On April 1, I celebrate my five-month anniversary as a dedicated adviser for humanities Ph.D. students.

I feel enormously privileged to be doing this work, and have been inspired and enriched by the many graduate students who have trusted me with their stories, their aspirations and goals, and their many thoughtful questions about career paths and professional development.

While no single conversation has been the same, I have, by this point, noticed a recurring trend, which is worth some reflection and analysis.

I totally get this. The résumé is very important. When I left faculty life, I paid someone to look at mine. It was worth every penny.

Yet what intrigues me is the moment (which happens fairly regularly), when—about fifteen minutes into the advising meeting—I put the document down and ask, “So … who are you talking to?”

Sometimes people look taken aback, or a little nervous. But the response is usually that they haven’t gotten around to the networking yet.

I understand this reply, because I, too, started my non-faculty job search with the résumé. But I can look back now and say with all confidence that I did it backwards. In fact, one could make a compelling argument that the résumé is just the tip of the job-search iceberg, and that in a truly efficient job search, it would be one of the final things people think about.

When we sit down to write that résumé, too often it’s a document without an audience. We may not have located any jobs to apply to yet. Or even if we’ve found an attractive job posting, very often we know no one at the organization, or what the organization is really about (beyond the website PR), or what the priorities are for the new role. There’s even a good chance that this “open” position may already be effectively filled, with several strong internal applicants already in line to interview.

Yes, you might, as a complete outsider to an organization, wow them with your stunning résumé and cover letter, beat the odds, and get invited in to interview.

But the odds are that you will land a job—and perhaps a much more suitable one—faster by building a strong network of professionals who share your interests, advise and mentor you, and hopefully feel invested in your success.

Consider that approximately eighty percent of jobs are never posted. Or if they are posted, it may be in obscure places, because for many organizations, posting is a requirement but recruitment is not really an issue.

If you start reaching out to people and asking them about their career stories, you may be surprised to hear how many of them, at one point or another, landed a job through networking. And once you start circulating among a group of people who do work that is interesting and appealing to you, they will likely remember you, and they just might send you an email—maybe six months later—when an interesting opportunity emerges.

Networking is so critical  a skill for anyone outside the faculty track that the VH@Duke blog will occasionally feature great networking stories. The first, by alumna Elizabeth Brake (Ph.D.’13 History), will appear next week.

In the meantime, consider my personal challenge to you. You may be a seventh-year student looking for other options if your campus visit doesn’t materialize into an offer. You may be a fourth-year student who thinks that a nonacademic work experience in a certain field could help shape your dissertation and make you more competitive for an academic job search. You may be a first-year who craves some distraction from the all-consuming vortex that is graduate study in the humanities.

Whoever you are, and whatever your professional goals, I challenge you to develop a networking habit. The concept of a habit is key here, because as a Ph.D. student, your primary focus must remain your coursework and the timely completion of your program. But if you develop a habit around connecting with new people, it will, to some degree, begin feeling like second nature and won’t require so much mental energy each time you do it. If time remains a concern, consider ways for networking to fit more seamlessly into the other activities you do as a scholar. For example, if you are dissertating and hit a spell of writer’s block, this could be a good time to send a couple of introductory emails. Or you might build in a small, dedicated window for these activities each week, such as early Friday afternoon.

Whatever form your networking habit takes, I recommend two conversations a month with someone who is not an academic. Even if you go on someday to hold the distinguished Rufus R. Winkydimple Chair in Very Important Stuff at a Research I, you will not have wasted your time. The ability to reach out and connect with a perfect stranger and build a productive collaboration is possibly the most valuable and transferable professional skill in the modern workplace, both within and beyond the academy.

Haven’t started networking yet? I’m still delighted to talk with you about drafting a résumé, because it still plays a role in the early stages of a job search. But I will consider it a huge success when more students come to me for résumé review after a great job opens up that they learned about through networking.

And I won’t charge you a penny for it, I promise.