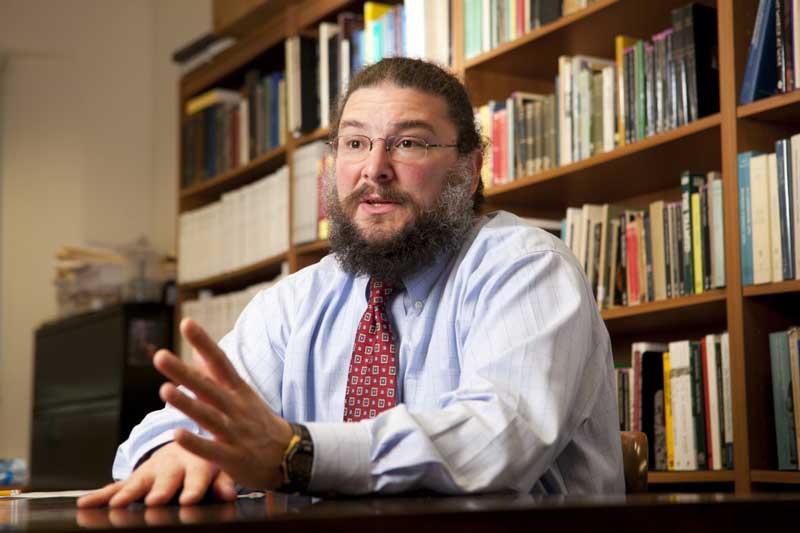 Joshua D. Sosin, sponsor of a Story+ project in summer 2017, the first time that the program was offered.

When Story+ first came on the horizon, I asked myself what kind of project would really get students pumped about humanistic investigation. I knew right away: have them read a 1000-year-old Greek dictionary written by a Patriarch of Constantinople. They could use Theodoridis’ apparatus fontium to model source dependencies between Photios, Hesychios, the Suda, Harpokation, Pseudo-Zonaras (subscription) and the Synagoge Lexicon Chresimon. If they could get a handle on that maybe we might start to understand how he built his own dictionary.

Uh-huh. With a pitch like that, I was prepared to win the prize for Least Viable Client, Ever.

The day after it was announced, I had a grad student in my office at 0700 to claim a seat. He beat a second student by a few minutes; but both followed the one who had called dibs before the official announcement (I used my own research funds so that all three could participate). Ok, grad students are like that, but what about the undergrads?

When we mustered, I suggested a couple initial tasks and questions, made sure everyone understood that this was a monster of a project, that no scholar had ever summoned the nerve to attempt it, that my office door was always open, and that anything they contributed, large or small, would be more than we know now.

It is hard to explain without getting very nerdy very quickly what a fantastic job the students did. This material is arcane even to classicists, but the work that they did together will inform my teaching and research on the subject for years.

I thought it might be useful to offer here some of what I learned from the experience. Some things I’d do the same if I were to do this again; some things I’d change.

Ready-made participants: First, the Story+ project followed a mixed graduate/undergraduate seminar that I had taught the spring before Story+ ran. So, I had a ready-made pool of students who could hit the ground running and might be looking for a vehicle to continue ideas that they had been developing in class. This meant that the grad students who directed daily operations had more than general classics expertise. They knew the subject well; they could lead with confidence and experience. This, I would do again. It worked well.

More structure: My plan from the start was to give only light requirements on the deliverables and let the grad students work out the specific details. I didn’t want to get in the way. But I think I underestimated how much care and guidance I tend to offer to students at all levels when they are developing writing projects, how hard I’ve worked over the years to get good at sniffing out viable ideas, and how hard it is to take the long view when you are so early in your career.

The grads did a good job—they are smart and serious and humane—but I dumped them into the deep end and wouldn’t do that again. If I were to run a Story+ project again, I’d give much narrower guidance on what the deliverables should look like. It can be done without hamstringing the grads’ intellectual freedom, and a little more structure would have given the undergrads an even greater sense of accomplishment.

Location, location, location: Since the Classical Studies department library holds many reference works that the students would need, they decided to make it their shared workspace, rather than the FHI. For them, I think this worked really well. My office is just down the hall. This meant that it was easy for me to casually drop in and ask the team for updates, see how they were working together, and celebrate their little daily successes. It also provided an opportunity for grads or undergrads to decide when to drop in and ask me for advice, even brag a little. The daily ebb and flow of professional interaction is not something that a student just knows. We learn it, through doing. So, the students’ decision about venue was a good one.

There was a cost though. They weren’t co-located with the other Story+ teams. If they had been they would surely have learned from the others’ experience in positive ways, maybe even ways that counteracted my own misstep in going light on the requirements. If I were to do this again, I’d urge strongly that the team split its schedule, sometimes close to me, sometimes close to the other teams.

Unexpected pluses: Currently, two of the students are collaborating with colleagues of mine on a modest grant proposal to build on some of the work that they did last summer. I hope they will succeed, but either way, the experience will be invaluable. Many Ph.D. students in humanistic fields do not get firsthand experience conceiving and writing proposals for funded research. These two students now have the chance to take what they learned from the experience—what went well and what did not—and try to do it even better on their own. This was certainly not an expectation of the project or even discussed during the project, but it will surely prove a powerful part of the Story+ experience.

This is just a taste of some of the lessons I learned along the way. I think they all incline in the same direction and toward the same advice: Think always and on all matters about how to power up a team. Sometimes you need to get in the way; sometimes you need to back off. The little things like where you sit and when you work can have an outsized effect on the sense community and the capacity for growth.

The team itself will have and should build on its own unique story: the backgrounds of its members, the courses that they took leading up to the project, the lessons that they will take to their future projects and classes, the inspiration that may lead them to keep the project running through grant proposals or other vehicles. This should be part of the thinking when you run an experiment like this, for in this way an experience like Story+ creates an occasion to replicate so much of what is best in academia: smart people working together to develop ideas that may take time to bear fruit, that may require many perspectives, that may take their own unexpected course, that may turn into knowledge and habits and experience that nourish and sustain us in work as in life.

All that while making friends. We’re having dinner together next Friday. #Dictionerds only.